Spring has finally come and almost done.  March, April and May have come and gone, and June is well underway. Our family hit our one year mark of our first year as chicken keepers in the middle of April and we excitedly accepted our next little chicks that arrived in late May.  So much has evolved in our first year and as I reflect back over the first year, it is amazing how much our nine little ladies have become such a HUGE part of our lives.  They great us in the morning and are tucked in each night.  They have become a huge part of our lives.

If I were to be asked by a newbie looking to starting a flock, there would be a few things I would advise them on.

I did a lot of research prior to our little ladies arriving last April, and even for months after.  I still enjoying reading blogs from seasoned chicken keepers to continually learn areas that I’m able to improve on for my flock.

While chickens are generally an easy animal to care for, there are so many things to know about them.  What foods are good and bad?  Winter woes.  Predator dangers.  Common aliments and how to treat them.  I could go on and on.

You need to make sure that you have reputable sources to gleam information from. You can Google “Backyard Chickens” or “Chicken Keeping” and get a thousand articles to read about keeping chickens.  Some information more reputable then others.  Honestly I’d stick to the several areas to get your information.

That’s not saying that information can’t be gleamed from forums, social media or blogs. Hello, you’re on a blog.  If one of the legit outlets above also have a blog as well to follow, I suggest that option first.  Andy Schneider, the Chicken Whisperer, warns against the blogs, forums and social media in the preface of his book, Chicken Fact or Chicken Poop: To the Facts and Fictions.  Stating that just because it worked for one person or that they claim it had no ill effect, you need to proceed with caution.  Stick to scientific evidence and tried and true information.

Our ladies in their original run.  They were approximately 10 weeks here.

Today, with all the online resources you can have lots of information with minutes.  But many times I find conflicting information.  The information I have found most accurate and useful is people who have been long time chicken keepers.  They are the ones that tend to write consistently  and provide strong information to follow and implement.

Honestly, a friend or family member that keeps chickens is invaluable.  Not only are the always willing to talk chickens!  They also have similar issues to deal with, talk through and “hacks” to utilize.

Always plan for more space than you think.  Double or even triple your initial thought.

Our first coop was a store bought, box-build-yourself coop stating it was large enough for 6-8 chickens.  That worked while they were small, and if we had bantam breeds .  That coop was not utilized more than 5 months.  It was beat up, falling apart and it was good we were ready for a new one.  We were already planning an expansion plan and as we began looking closer at the winter months ahead of Western Pennsylvania, we realized we were in trouble.

The box-build-yourself coop is not a bad option, but I think you need to plan to free range your chickens to allow them more room.  Also, you need to remember, they are cheaper for a reason.

When planning space for your flock, always plan for more than you think is necessary.  One, chickens with more room are happier.  Typically three square feet of coop space per chicken is needed, and another ten square feet of run space.  But the more, the better.

Two, the more space you have, typically the nicer the area will stay.   Chicken manure is high in nitrogen and that can do some serious damage to a run, plants and landscaping.  Allowing your chickens more space will give reprieve to the overall area.  However, you’ll probably find they venture and root around in other areas (mulch, flowerbeds, gardens, etc.).  You’ll really need to keep an eye on them.

Third, and last, chicken math is real!!!  I cannot stress this enough!  I laughed when I was told and read about this.  But the reality is, I’ve seen it.  Heck, I’ve been “victim” to it!  How else did we add (12) chicks this year!

Once you become a chicken keeper, you’ll want to keep a steady amount of layers, add variety in to your breeds, variety to your eggs, or simply fall for “Chick Days” at your local feed store.  Chicken math simply is the act of picking up more chickens than your initial plan, but in your mind, you’re still on point.

You’ll want space, because you can easily fall prey to chicken math, and what was once lots of extra space for your flock, is now adequate or less than because you simply kept adding.  We found out how quickly we needed to add on! 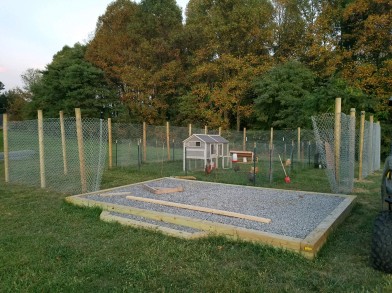 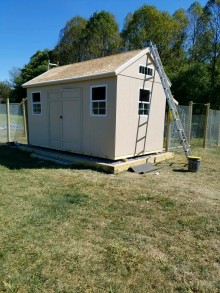 One thing that I have found, something that I didn’t anticipate, was how much of a stress relief our chickens are.  There are many days that I would find myself at the end of the day, simply enjoying watching the girls pecking around the yard.  This became my distressing time.  Even my husband found himself outside at times in a chair by my side, just talking while our ladies chased bugs and looked for goodies around their large run.

Even now, my time with my flock is a happy point of the day.  They are always happy to see me, curious at what I am doing, and follow me around the run or while I’m working outside.  Their antics around the yard make for entertaining moments in my day.  So regardless of what the day brought I always walk away from the coop I’m in a better mood.

You need to be prepared, chickens can be addicting.  There is something so cool about an animal you raise from a day old, and as they grow, running after bugs and then the first day they provide you with an egg!  Egg collecting still brings up the question each day of how many eggs we got.

We’ve expanded from our original flock twice now, and I love having multiple breeds to

Our new additions arrived in May.

see and learn of their differences (egg color, broodiness, and friendliness).  This year we’re planning meat chickens for the fall.  We’ve considered a rooster and still might go that route in the future. One area I’ve given no thought, but could see the potential in the future is expanding our flock by hatching eggs.

It’s been said that chickens are a “gateway” animal to other forms of animals.  We’ve held off so far…

With chickens, there are so many variations and areas you can expand to, you can keep growing your hobby.

Our first year of chickens has been wonderful.  And while we had high and low points, the overall was better than I could have expected.  Considering starting, or adding to, your own flock today.  You won’t regret the journey.

One thought on “Reflections of a First Time Chicken Keeper”

We do currently offer eggs by our lovely, happy hens!  We have 14 chicken breeds and 8 duck breeds. Our flock totals of 32 birds.  Please contact us via Facebook or email to let us know if you are in the local area!